What is a Heat Sink & it’s Purpose

What is a Heat Sink & it’s Purpose

Contents hide
1 What is a Heat Sink?
2 What is Thermal Conductivity?
3 Does LED produce heat?
4 How to mitigate heat issues?

The following article on ‘Heat Sink’ will be the Final Part of the 3 Part Series on components of a LED Light.

In this article, we will explain why is it necessary to have a heat sink for LED lights, and how it affect LED light performance and its lifespan.

What is a Heat Sink?

Heat sink is designed for the purpose of transferring heat away generated by electronic components or devices. It can be found from your mobile phones, computers and even refrigerators.

The existence of a heat sink is crucial, as heat is most often the number one killer of any electronic components and it will drastically reduce the performance and lifespan of a product.

What is Thermal Conductivity?

Thermal conductivity is an important aspect when it comes to understanding how heat sink work.

Thermal conductivity is the measurement of a material in its ability to conduct heat, and its measured in Watt per metre-kelvin – W/mK. Therefore, it is important to select the right material to be used as heat sink, as it directly affect the efficiency of heat dissipating through conduction. 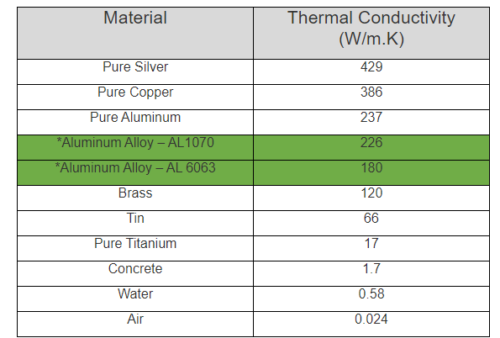 From the table above, it can be seen that Silver & Copper have high thermal conductivity, but these metals are rare and expensive, making aluminum the most commonly used material for LED heat sinks.

As LED produced far less heat during operation compared to incandescent and fluorescent, therefore it is not necessary to pair LED lights with high thermal conductivity heat sink.

It’s true to a certain extent, that LED does not produce heat, as LED does not emit infrared radiation (IR) compared to incandescent and fluorescent lights, and LED are typically cool to touch even during operation.

Even though LED does not produce much heat, there are other components of a LED light that produce heat, such as the semiconductor built within the light. As with all electrical components, heat is an inevitable byproduct generated during operation, thus heat sink is needed for LED lights.

How to mitigate heat issues?

This is where heat sink enters as an important component of a LED light, heat sink is used to provide the path for heat to travel away from the LED to outside elements.

In summary, we hope this article has given you better insight on the importance of heat sink in a LED and how it ensures the lifespan of the LED lights.

To ensure Paragon LED will always operate at its optimum, our lights are fitted with alloy such as AL 1070 and AL 6063, to ensure our LED is able to operate to its published lifespan.